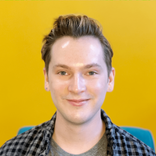 Charlie leads the development team at GoodMaps. He holds an M.Eng. in Computer Engineering and Computer Science and has been writing code since he was 8. He specializes in web development, specifically React and React Native, and tries to approach development from an iterative, user-first perspective. He is especially excited about the possibility of mobile devices using LiDAR for next-gen augmented reality and how that could impact the indoor navigation space. Charlie believes in servant leadership and empowering others to achieve at a higher level.

Charlie is a horror movie aficionado and believes that a good horror movie is like a fine wine. Some of his favorites include The Shining, Midsommar, Get Out, The Thing, You’re Next, House of Wax, and I See You. He also enjoys experimenting with virtual reality and has played through Half-Life: Alyx at least three times at the time of writing. (Seriously though, who is the G-Man?)

Fave clothing brand: MegaYacht is an indie designer who makes spoof t-shirts of brand names like Gucci but adds cartoon characters like the Powerpuff Girls or something. It’s probably a copyright issue but hey I don’t make them, I just wear them!

Fave album: Beach House’s album Bloom has been my #1 most listened to album on Spotify for the past 5 years.